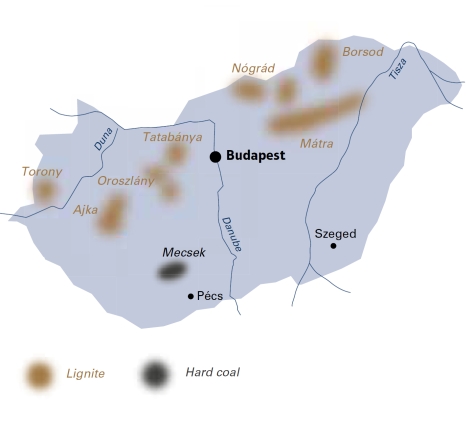 National electricity generation in 2015 amounted to 30.2 TWh, with an installed capacity totalling around 8.6 GW of which 7.3 GW are constantly available.  A net 13.7 TWh of electricity was imported.  Nuclear energy from Hungary’s sole state-owned nuclear power plant at Paks accounted for 52.5% of domestic electricity production.  The Paks power plant has four reactors with a total gross capacity of 2 000 MW.  A permission procedure has recently been launched to extend the lifetimes of these units.  In addition, there are plans to add new units to the existing nuclear plant in the near future.  Gas-fired generation also makes a major contribution to national electricity supply:  it had a share of 16.8% in 2015.  Electricity produced from coal and lignite had a share of 19.5% in domestic electricity production in 2015, generated mainly by MÁTRAI ERÖMÜ ZRT.  Renewable energy had a share of about 9.9%: biomass and wind being the main pillars followed by hydro, biogas and renewable municipal waste.  Solar plays only a subordinate role.  Hungary aims to increase the renewable energy share in gross final energy consumption to 14.65% by 2020.

Hungary’s lignite and brown coal resources are concentrated in the regions of Transdanubia and in northern and north-eastern Hungary.  In 2015, Hungary’s total lignite output was 9.3 million tonnes.  About 91% of this was used for heat and power generation.  The remaining lignite went to municipalities, households and other consumers.

There were three main lignite extraction sites in Hungary.  About 6% of total production came from the Márkushegy underground mine belonging to VÉRTESI ERŐMŰ ZRT in western Hungary.  The mine supplied coal to the associated Oroszlány power plant.  At the end of 2014, mining operations ceased, but the power plant continued working using stockpiles at the mine and power plant, as well as lignite from other sources.

The major share of Hungary’s lignite production is from the two opencast mines Visonta and Bükkábrány belonging to MÁTRAI ERŐMŰ ZRT.  The company is located 90 kilometres north-east of Budapest.  In 2015, MÁTRAI produced approximately 8.8 million tonnes of lignite and removed 65.2 million cubic metres of overburden.  The lignite is used in the company-owned power plant at Visonta which comprises five lignite-fired units and two topping gas turbines.  The power plant has a total capacity of 966 MW (2 x 100 MW units, 1 x 220 MW, 2 x 232 MW, two gas turbines of 2 x 33 MW and a 16 MW solar park).

Besides lignite and gas, biomass is co-fired to a fuel input level of around 10%.  To supply the power plant with lignite, the company operates an opencast mine at Visonta adjacent to the power station and a second opencast mine at Bükkábrány, some 50 kilometres away.  From there, lignite is transported by rail to the power plant.  The approved mining fields of the two MÁTRAI opencast mines have about 0.5 billion tonnes of lignite reserves.  The company is exploring further lignite deposits which could be developed at a later date.

At the end of 2014 there were some test mining operations in the Mecsek region.  PANNON HŐERŐMŰ KFT will mine around 15 000 tonnes of sub-bituminous coal each year at the Pécs-Vasas opencast mine, supplying local households with affordable fuel.