Hard coal and lignite are of strategic importance to Poland.  Compared with other European Union member states, Poland has substantially larger reserves of hard coal and lignite and makes good use of these energy resources for electricity production.  Hard coal reserves total 21.1 billion tonnes, located mostly in the Upper Silesian and Lublin coal basins, while lignite reserves amount to 1.4 billion tonnes with a further 22.1 billion tonnes of economic resources.  Due to the relatively low potential of replacing coal with other energy sources, current forecasts show coal retaining its major role in the Polish energy mix for many years to come. 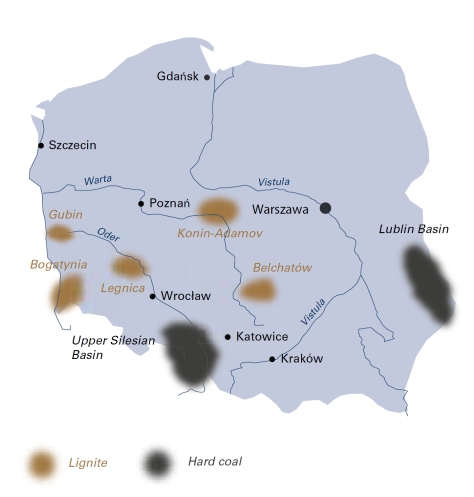 The average age of coal-fired power units in Poland is approximately forty years;  only 10% of units are less than ten-years old.  Lignite-fired units are amongst the newest ones and are being refurbished to meet EU environmental standards.  Currently, state-controlled energy companies are building around 5 GW of new coal- and gas-fired capacity.  With stricter emission standards and an ageing fleet, it is estimated that more than 4 GW of capacity will retire by 2017, rising to 12 GW by 2030.  Poland has no nuclear power generation, but has plans to construct a nuclear power plant by 2024.

Further development of coal-based energy production in Poland is currently uncertain due to implementation of EU climate and energy policy.  The main objective of this policy is to substantially reduce the emissions of greenhouse gases into the atmosphere.  According to this decarbonisation policy, emissions should reduce by 40% in 2030 and by 80% in 2050, compared with 1990.  If these targets are met, then it would be difficult to imagine Poland’s energy mix or its mining industry in their present forms:  more than 80% of electric power derives from mainly indigenous coal.  If the objectives of EU climate and energy policy remain unchanged, then the share of fossil fuels (chiefly coal) in power generation will have to undergo a drastic reduction and this will have a direct impact on Polish coal producers.

Exploitable hard coal reserves are located in Upper Silesia and in the Lublin basin in the east of Poland, with the Upper Silesian coalfield accounting for 78.9% of the total.  The coal reserves in this region contain some 400 coal seams with thicknesses of 0.8 metres to 3.0 metres.  About half of these seams are economically workable.  Some 71.6% of the reserves consist of steam coal, 27.0% are coking coal, while other coal types account for the remaining 1.4%.  All hard coal is deep mined at an average working depth of approximately 600 metres.  Mining is fully mechanised, with over 90% of coal produced by longwall systems.

Since the beginning of the 1990s, the Polish mining industry has been going through a process of transformation to reduce excess coal production capacity and adapt the industry to market conditions.  Between 1989 and 2015, coal production decreased from 177.4 to 72.2 million tonnes.  During the same period, employment in the Polish hard coal mining industry decreased from 407 000 to 90 000 employees at the end of 2015.

Despite the significant reduction of mining capacity that took place over the last two decades, Poland remains the largest hard coal producer in Europe.  In 2015, a total of 72.2 million tonnes of coal were produced at mines in Poland.  The largest producer, KOMPANIA WĘGLOWA (KW), was re‑organised in May 2016 when mines were transferred to POLSKA GRUPA GÓRNICZA (PGG – Polish Mining Group).  Other leading coal-mining companies are JASTRZĘBSKA SPÓŁKA WĘGLOWA (JSW), KATOWICKI HOLDING WĘGLOWY (KHW) and LUBELSKI WĘGIEL „BOGDANKA” (LW „Bogdanka”).  JSW is also the largest coke producer in the European Union, with an output of 4.2 million tonnes in 2015.

After a successful privatisation in 2009, a majority (65%) of the shares in LW „Bogdanka” were acquired in 2015 by ENEA, a Polish energy company providing around 9% of Poland’s electricity.  In 2011, Poland’s largest coking coal producer, JSW, was also privatised and listed on the Warsaw Stock Exchange, although the state retains a majority shareholding.  Separately, the Czech group EPH acquired Silesia mine from KW in 2010 and restarted coal production in 2012.  In 2015, TAURON, another Polish energy company, agreed to buy the Brzeszcze mine in Southern Poland.

In 2015, steam coal accounted for the majority of hard coal output (59.2 million tonnes or 82%).  Coking coal (12.9 million tonnes) is mainly extracted at mines belonging to JSW (hard coking and semi-soft) and KW (semi-soft).

Currently, the Polish hard coal mining industry is troubled by economic problems.  As in the United States and elsewhere, the mining industry in Poland has been hit by very low prices on the international coal market, so low that some companies came close to bankruptcy.  In Poland, the ongoing process of bringing the sector back to profitability is aimed at investment in modernisation, adjusting production volumes to match market demand, reducing costs and increasing productivity.

A new company has been established, POLSKA GRUPA GÓRNICZA (PGG – Polish Mining Group), that took over assets of KOMPANIA WĘGLOWA comprising eleven mines.  Other mining companies are also working to reduce costs.  The most unprofitable mines or units of integrated mines are being transferred to SPÓŁKA RESTRUKTURYZACII KOPALŃ (SRK – Mines Restructuring Company) for eventual closure.  By November 2016, seven mines had been transferred.

These structural changes to the industry are already showing promise and the decision in November 2016 of the European Commission to allow state aid for the closure by 2018 of uncompetitive units allows the process to continue with the co‑operation of investors and social partners.

Coal exporters and importers have an efficient infrastructure at their disposal, with cross-border rail links to neighbouring countries and to the Baltic Sea ports of Gdańsk, Szczecin-Świnoujście and Gdynia.  Among these terminals, Gdańsk and Świnoujście are adapted to loading Capesize vessels.  Hard coal exports from Poland totalled 9.0 million tonnes in 2015.  More than half of the shipments were transported overland to neighbouring countries, mainly Germany, the Czech Republic and Austria, while the remaining volumes were transhipped via the Baltic ports.  In 2015, WĘGLOKOKS, the largest coal exporting company in Poland, exported around 4.7 million tonnes, this being more than half of all Polish hard coal exports.

In 2011, coal imports peaked at 15.0 million tonnes, but have since fallen, mainly due to the economic slowdown.  In 2015, coal imports were 8.2 million tonnes and were once again dominated by deliveries from Russia (60.3%).  Smaller quantities came from Australia (coking coal), the Czech Republic, the United States and Colombia.

In order to improve the combustion and gasification of coal through the use of modern technologies, a Clean Coal Technology Centre (CCTW) has been established in Katowice, co-financed with EU funds and co-managed by the Central Mining Institute (GIG) and the Institute of Chemical Processing of Coal (IChPW).  Poland also has a well-developed and technically advanced mining machinery and equipment industry.  Together with the research institutes and technology centres KOMAG, EMAG and GIG, the machinery and equipment sector assists the Polish hard coal industry to continuously develop and modernise its activities.

Poland exploits its lignite deposits exclusively at surface mines.  Two of these operations are located in central Poland and a third one lies in the south-west of the country.  In 2015, total lignite production was 63.1 million tonnes, 98.7% of which was used by mine-mouth power plants.  Lignite-fired power stations generated 52.8 TWh of electricity, being one third of the total gross power generated in Poland.

The Bełchatów lignite basin, situated in the central part of Poland, incorporates two lignite fields:  Bełchatów and Szczerców.  In 2015, the Bełchatów mine produced 42.1 million tonnes of lignite or 66.7% of Poland’s total lignite production.  Mining this lignite required the removal of some 119.7 million cubic metres of overburden, which equates to an overburden-to-lignite ratio of 2.8 cubic metres per tonne.  The depth of mining operations in the Bełchatów field is about 300 metres and the average calorific value of the fuel is 8 070 kJ/kg.  Bełchatów mine is expected to remain in operation until 2040.  The lignite output is supplied entirely to a mine-mouth power plant owned by PGE GiEK, with a capacity of 5 298 MW.  This power plant generated 31.7 TWh in 2015, covering about 19% of domestic power consumption.  Built between 1981 and 1988, it generates the cheapest electricity in Poland.  A new 858 MW power unit was put into service in 2011.

In the Turoszów lignite basin, located in the south-west of Poland, the Turów mine has a production capacity of 15 million tonnes per year (4.1 Mtce).  Reserves are estimated at 340 million tonnes (90.5 Mtce).  In 2015, the mine produced over 7.3 million tonnes of lignite, or 11.6% of Poland’s total lignite production, with a calorific value of 9 500 kJ/kg.  Up to 96% of the lignite is supplied to the 1 498 MW PGE GiEK mine-mouth power station, one of the most modern in Poland.  In 2015, some 51.1 million cubic metres of overburden were removed, giving a stripping ratio of 6.9 cubic metres per tonne.  Turów mine is expected to be in operation until 2045.

The Bełchatów and Turów lignite mines, as well as the adjacent power plants, belong to the group of companies included in PGE Górnictwo i Energetyka Konwencjonalna (PGE GiEK) having its office in Bełchatów.  The company is one of the six key companies belonging to the majority state-owned Polish utility POLSKA GRUPA ENERGETYCZNA (PGE).

The Pątnów-Adamów-Konin (PAK) lignite basin, located in central Poland between Warsaw and Poznań, has been producing lignite for over fifty years and now generates approximately 8.5% of Poland’s electricity needs.  There are two active mines:  Konin and Adamów, belonging to ZESPÓŁ ELEKTROWNI PĄTNÓW-ADAMÓW-KONIN (ZE PAK Group) which was listed on the Warsaw stock exchange in October 2012.  The mines and power plants are operated by the subsidiary companies PAK KWB Konin SA and PAK KWB Adamów SA.

PAK KWB Konin SA has a production capacity of 15 million tonnes per year (4.1 Mtce).  Lignite is produced at three sites:  Jóźwin IIB, Drzewce and Tomisławice.  Total lignite production reached 9.4 million tonnes in 2015.  It required the removal of 73.0 million cubic metres of overburden, a stripping ratio of 7.7 cubic metres per tonne.  The working depth at these pits varies between 25 metres and 80 metres.  The extracted fuel has an average calorific value of 9 220 kJ/kg.  Lignite production from Konin mine is planned through to 2030.  The mine supplies lignite to three mine-mouth power plants:  Pątnów I with an installed capacity of 1 200 MW, Konin (583 MW) and Pątnów II (464 MW).

PAK KWB Adamów SA operates three opencast pits, namely Adamów, Władysławów and Koźmin.  Adamów mine’s overall production capacity is 5 million tonnes per year (1.3 Mtce).  The depth of mining operations is between 44 metres and 70 metres.  The deposits currently being exploited have workable reserves of 44 million tonnes (11.9 Mtce).  In 2015, lignite production reached 4.3 million tonnes, all of which was supplied to the 600 MW Adamów mine-mouth power station.  Some 31.8 million cubic metres of overburden were removed, which implies a stripping ratio of 7.4 cubic metres per tonne.  PAK KWB Adamów SA is expected to remain in operation until 2017.

The average productivity at Poland’s lignite mines was 6 500 tonnes per man-year in 2015 and employment totalled 9 574.  Poland’s lignite mining areas can maintain their annual production output at current levels of around 60 million tonnes and lignite is expected to play an important role in Poland’s energy supply until at least 2030.