Although its energy resources are relatively large, the Slovak Republic does not have any significant exploitable fossil energy reserves.  While the extraction of crude oil and natural gas accounts for a tiny share of overall energy supply, there is quite a large potential for gas storage.  In recent years, there has been a public discussion on the exploitation of a uranium deposit at Kurišková. 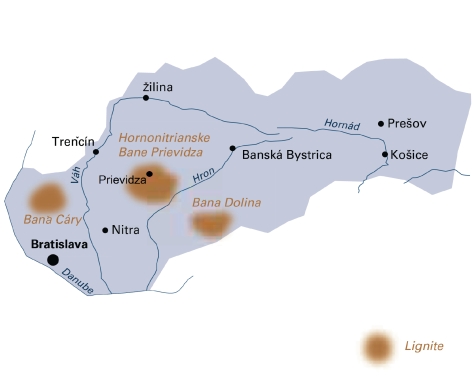 In the south-east of the country, the coal-fired Elektráreň Vojany I (EVO I) power plant’s 4 x 110 MW boilers are designed to use imported semi-anthracitic hard coal from Ukraine.  During 2014 and 2015, there were problems with this coal supply due to the conflict in Ukraine.

Two gas-fired power stations were taken off-line in 2013 due to their high operating costs in a low-price electricity market:  the 350 MW Malženice CCGT commissioned in 2011 near the town of Trnava, 60 kilometres from Bratislava, and the 4 x 110 MW Vojany II or EVO II which was commissioned in 1973-74 as an oil-fired boiler plant, but converted to gas soon after.  Problems with Russian gas supplies through Ukraine in 2012 and 2014 also influenced these decisions.

Overall, the energy mix under the national energy policy is well-balanced, with support for indigenous lignite and renewables.  Given the high share of nuclear in its power generation mix, Slovakia’s dependency on imported energy sources (60.9%) is only slightly above the EU average, despite an almost 100% dependency on imported oil and gas.

Lignite resources are estimated at more than 400 million tonnes and a further 500 million tonnes should be available in the future.  Exploitable lignite reserves, including brown coal, are calculated at 100 million tonnes.  There is an insignificant hard coal deposit in the eastern part of Slovakia, which is not exploitable.

In 2015, 1.8 million tonnes of lignite were produced.  Lignite is extracted by two companies at four underground mines located in the central and western parts of Slovakia.  More than 90% of the total lignite production was used for electricity generation and district heating.

HORNONITRIANSKE BANE PRIEVIDZA (HBP) is a private coal mining company with a history of over one hundred years.  Seated in the town of Prievidza, HBP extracts lignite at the Handlová and Nováky deposits located in the Horná Nitra region in central Slovakia.  In the past, there were three independent collieries in operation here – Cigeľ, Handlová and Nováky – which were integrated into HBP.  The depth of the worked coal seams ranges from 150 metres to 450 metres.

The lignite seams have a thickness of up to 20 metres and are mostly extracted using a long-wall top-coal caving (LTCC) method.  Thin seams, of around 4 metres, are extracted with simple slicing long-walls.  HBP also operates a mine rescue station which serves all mining districts in Slovakia.  All lignite is supplied to the nearby 486 MW Nováky power plant (Elektráreň Nováky – ENO) belonging to the SLOVENSKÉ ELEKTRÁRNE COMPANY which is 50% owned by ENEL of Italy and 50% by EPH of the Czech Republic.  Nearly one third of the lignite supplied in 2015 came from mines in the Nováky deposit.

BAŇA DOLINA COMPANY, located near the town of Veľký Krtíš, extracted lignite from the Modrý Kameň deposit in southern Slovakia at a depth of 150 metres.  Lignite was supplied to the ENO power station.  The mine was closed in May 2015.

The BAŇA ČÁRY COMPANY near the town of Holíč in western Slovakia extracts around 170 thousand tonnes of lignite each year from a working depth of 180 metres.  The mine plans to expand its annual production to reach 350 thousand to 500 thousand tonnes.

BANSKÁ MECHANIZÁCIA A ELEKTRIFIKÁCIA NOVÁKY (BME) is a modern mining equipment supplier owned by HBP that designs and manufactures high-pressure hydraulic roof supports suitable for LTCC mining.  BME also produces other mining and construction machinery, as well as equipment for the transport sector.

Together with SLOVENSKÉ ELEKTRÁRNE and ENEL, HBP is actively engaged with modernising the coal-fired ENO power plant at Nováky.  In May 2015, work began on a de‑NOx system for two of the 110 MW blocks at the plant.  HBP also has an interest in research and works with universities on various projects.