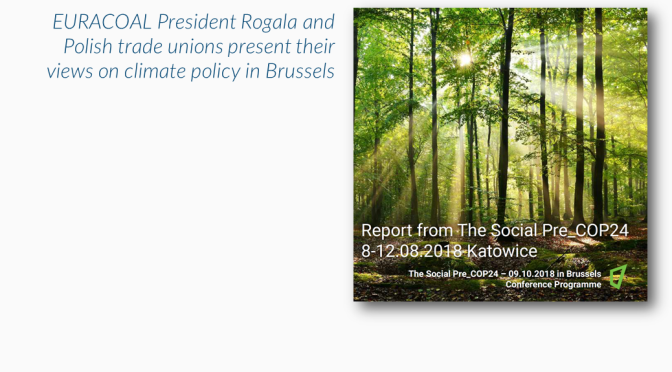 On 9 October at the European Parliament in Brussels, MEP Jadwiga Wiśniewska hosted trade unionists, industrialists and Secretary of State Tobiszowski for a conference on the Polish way to a clean environment. This aims to replace the concept of “decarbonisation” with one of “climate neutrality” whereby CO2 emissions are balanced by CO2 absorption in forests. EURACOAL was represented by President, Tomasz Rogala at this sequel to an earlier event in Katowice, Poland. He spoke on the climate challenge, balanced by the need to maintain energy security and economic competitiveness in the European Union.

Bringing together the mining trade union Solidarność, OPZZ (All-Poland Alliance of Trade Unions) and the Trade Union Forum (FZZ) with professionals from SITG (Association of Mining Engineers and Technicians), the think-tank Górnictwo OK (Mining OK) and coal mining companies, the conference aimed to influence the Parliament position in the lead up to the UN COP24 climate conference in Katowice.

Speakers called for a serious reflection on climate policy and its impact on future generations. Grzegorz Tobiszowski, Secretary of State in the Polish Ministry of Energy, said that,

“We should put more emphasis on the primacy of economic competitiveness and the development of modern, clean coal technologies, because we in Europe are slowly losing our leading position.”

MEP Wiśniewska described the Paris Agreements as “a climate constitution for the globe”, but as with any piece of legislation, it can only work if fully implemented with verified efforts by all countries. A current resolution of the Parliament calls for a “zero-emission” EU economy by 2050 which she saw as too restrictive. Given the negative perception of those that do not fully support such ambitious climate goals, her decision not to sign the resolution was a political risk.

Solidarność leader, Kazimierz Grajcarek, explained that the trade unions do not act “against” anything, adding that,

“We want to live in a clean environment. The problem is that when speaking about the climate, people and science are very rarely mentioned.”

From the University of Economics in Katowice, Dr. Magdalena Wójcik-Jurkiewicz presented a study on the cost of energy transition in Silesia. With a new job requiring an average of PLN 1.2 million (€280 000), the cost of replacing 200 000 lost jobs in mining would reach around PLN 200 billion or €50 billion. Dr Paweł Bogacz of the AGH University of Science and Technology, representing the “Mining OK” initiative, spoke about the impossibility of using only renewables during the energy transition; energy security demanded reliable sources such as coal which also happens to contribute to the national economy.

A common statement by the Polish trade unions on the costs and benefits of climate policies was published alongside the events in Katowice and Brussels (click images to download in Polish or English). The unions call for a full assessment of all climate-related policies to date in terms of ecological effects and socio-economic impacts.