The Polish coal industry was a major sponsor of the UNFCCC COP24 climate conference held in Katowice during the first two weeks of December 2018.

On 13 December, EURACOAL members joined a panel on coal gasification in the Polish Pavilion, chaired by Prof. Stanisław Prusek of the Central Mining Institute (GIG).

He explained that coal gasification was not a new idea, with more than fifty years’ development including intense activities during World War II and the apartheid years in South Africa.

Mr. Waldemar Łagoda of the Polish Ministry of Energy presented Poland’s latest draft energy strategy. Poland’s heavy dependence on coal will decline, but coal-based power generation will remain important as electricity demand increases. He said Poland should not be punished for this, noting that the country had already reduced its CO2 emissions by 30% since 1990 when 98% of power generation was based on coal. Pollutant emissions have also decreased significantly. The energy mix for power generation will continue to change, with coal’s share declining from today’s 77%-78% to 32% in 2040, according to the strategy which is open for consultation. The growth in low-carbon energy sources – nuclear and RES – will allow average emissions to fall to 550 gCO2/kWh in 2035, requiring new infrastructure and new approaches to energy storage, coal gasification, syngas production and hydrogen use.

EURACOAL President, Tomasz Rogala, believes that coal gasification is a logical approach in a world that uses 7.5 billion tonnes of coal each year. Talk in Europe of phasing out coal seems unreasonable, he said, presenting gasification as the right response for four reasons:

Mr. Rogala called for a broad coalition of the coal sector with municipalities, regional stakeholders, the chemical sector and consumers. He envisages a six-year plan to bring gasification alive at PGG sites such as Ziemowit and Jankowice. He concluded his positive message by noting how a country with one of most competitive economies in the world has embraced coal gasification, namely China.

Prof. Aleksander Sobolewski from the Institute for Chemical Processing of Coal (IChPW) in Zabrze spoke on the global development of gasification technologies, suggesting that the 550 gCO2/kWh emission performance standard (EPS) proposed by the European Commission as part of its Clean Energy package means that commercial gasification with fuel cells (IGFC) must be developed. He opined that the concept of decarbonisation was wrong: carbon will be needed by the chemical and other industries in the future, so policy should focus on low-emission technologies such as polygeneration for power and ethanol production with zero emissions and CO2 sequestration in useful chemicals.

Prof. Prusek added here the achievements in gasification at the Central Mining Institute (GIG) in Katowice, including the results of analysis used to select coals for gasification. He observed that fluidised-bed reactors were the most suitable for PGG’s gasification projects, a view confirmed by Mr. Wojciech Książkiewicz representing the US technology company SES. Mr. Paweł Górski of Węglokoks Energia expressed his hope that Enea would go ahead with its IGCC project and said that Węglokoks itself was planning a small project that should achieve the 550 gCO2/kWh EPS.

During the discussion panel, Prof. Sobolewski said that the necessary research had all been done. What was needed were political decisions based on the feasibility studies now underway. Mr. Rogala agreed, explaining that technology development is part of everyday work in his mines where equipment becomes more and more automated with the transformation to Industry 4.0. PGG, he said, would pursue all options at its sites, including solar PV, but progress with coal gasification was a must in Poland.

The Japanese Pavilion sponsored by Panasonic

African Union Commission – just one of many empty stands

Spodek and main entrance to COP24

Monument to the Scouts of September 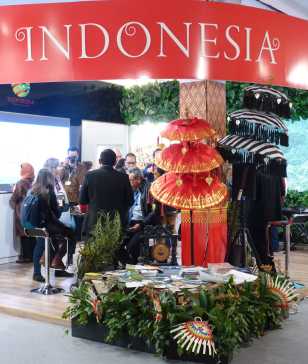 The Indian Pavilion with high-tech robots

To the Polish Pavilion

Black to Green transformation in Katowice

Black to Green transformation in Katowice 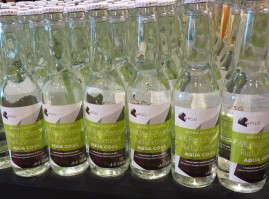 An empty press conference with the Minister of Investment and Development, Jerzy Kwienciński, to announce Poland’s intention to join the UN Global Compact Government Group on corporate social responsibility 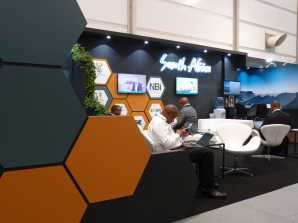 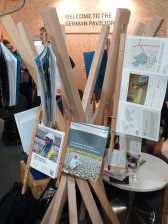 US delegation presents the Coal FIRST R&D initiative before NGOs protest: (L-R) Steve Winberg, Assistant Secretary for Fossil Energy at the US Department of Energy, Patrick Suckling, Australian Ambassador for the Environment, and Rich Powell, Executive Director of the ClearPath Foundation