Romania enjoys solid economic growth (3.7% in 2015) and a low unemployment rate (6.6%), thanks mainly to its manufacturing sector.  The country has significant energy resources, including coal, natural gas and oil.  In fact, over 80% of the country’s primary energy supply is met by indigenous energy resources, with coal and lignite accounting for a 17.8% share, this being slightly above the EU average. 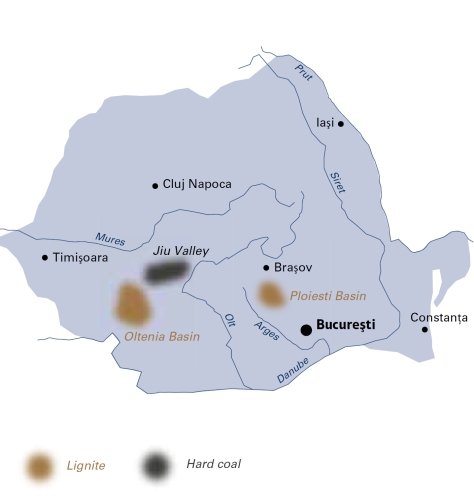 Total hard coal resources are estimated to be 2 446 million tonnes of which 252.5 million tonnes are commercially exploitable within the currently leased areas, although as little as 11 million tonnes might be economically recoverable.  Proven reserves of lignite total 280 million tonnes, with a further 9 640 million tonnes of resources.  Of these deposits, 95% are situated in the Oltenia mining basin where more than 80% can be surface mined.  The remaining lignite deposits have low economic potential, explaining why extraction in most other areas has stopped.

Romania’s first commercial nuclear reactor began operating in 1996 and a second CANDU reactor was commissioned in May 2007, thus completing two of the five reactors whose construction began in the 1980s and bringing the total gross capacity at the Cernavodă nuclear power plant to 1 413 MW.  The completion of two further 720 MW reactors is planned by SOCIETATEA NATIONALA NUCLEARELECTRICA (SNN) in collaboration with CHINA NUCLEAR POWER ENGINEERING COMPANY (CNPEC) and Chinese investors who will take a majority ownership share.

Romania has established an energy policy framework which is in line with EU law, regulating the production of gas, coal, lignite, oil and nuclear energy, as well as power plant modernisation.  The National Regulatory Authority for Energy (ANRE) is the responsible independent authority, reporting to the prime minister.

Back in January 2011, the National Hard Coal Company had seven underground coal mines (Lonea, Petrila, Livezeni, Vulcan, Paroşeni, Lupeni and Uricani).  In September 2012, these mines were merged with hard coal-fired power plants to create the COMPLEXUL ENERGETIC HUNEDOARA (Hunedoara Energy Complex), a state-owned electricity and heat producer headquartered at Petroşani in the Southern Carpathians.  The company accounts for approximately 3% of Romanian electricity generation, with a capacity of 1 225 MW and about 6 300 employees.

The results of an economic analysis determined that the Petrila, Paroşeni and Uricani mines in the Jiu Valley did not have viable prospects and so they were included in a closure plan with Petrila to close in 2015, followed in 2017 by Paroşeni and Uricani.  State aid, granted under case SA.33033 that was agreed by the European Commission in February 2012, is intended to facilitate these closures.

Of the four mines scheduled to continue after 2018, only two will now continue production (Livezeni and Vulcan).  Also, only 385 MW of the 1 225 MW currently installed capacity will remain:  a 150 MW unit at Paroşeni TPP, modernised in 2005, and the 235 MW unit 3 at Mintia TPP, modernised in 2009.  Nonetheless, this means that hard coal mining and hard coal-fired power generation capacity in Romania will continue after 2018, possibly under a Service of General Economic Interest (SGEI) exemption.  Given this situation, it is encouraging that a potential investor has expressed its interest in developing and further modernising the Hunedoara Energy Complex.

COMPLEXUL ENERGETIC OLTENIA (Oltenia Energy Complex) is Romania’s largest producer of coal-based energy with an installed capacity of 4 337 MW.  The company is responsible for 99% of national lignite production.  Its mines and power plants provide direct jobs for 15 500 people.

In order to avoid impacts on neighbouring agricultural land, overburden is placed back in the excavated voids, which also helps reduce costs.

Lignite mining offers Romania a competitive advantage with the use of modern technologies and skilled labour to provide low-cost, base-load electricity.  Reserves of lignite are concentrated in a relatively small area of 250 square kilometres where lignite is mined in twelve opencast pits licensed for another fifty years.  These reserves provide a long-term, secure supply for the adjacent Turceni (1 650 MW) and Rovinari (1 320 MW) power plants.  Further to the south lie the 300 MW Craiova and 630 MW Ișalnița power plants, also lignite-fired.

Oltenia Energy Complex and CHINA HUADIAN ENGINEERING COMPANY are currently negotiating to develop a new 600 MW lignite-fired unit that will replace some existing older units.  A new company, HUADIAN OLTENIA ENERGY SA, will be registered with headquarters in Rovinari and employ 250 people.  During the construction, over 4 000 jobs will be created and, with an annual lignite requirement of 4.6 million tonnes, the project is expected to secure 3 000 jobs.