Around the world, coal makes a crucial contribution to the security of energy supply.  It is a very competitive fuel and adds economic value wherever it is used:  for steelmaking, for cement production and, most importantly, for electricity production.  Coal oils the wheels of industry.  A diverse energy mix with coal can be part of any strategy that aims to reduce risks and underpin sustainable economic growth.

The aim of this section is to give an overview of how coal production and use in the European Union fit with the wider global picture of expanding coal consumption.  Although it is impossible to forecast the future, it is instructive to look at current energy trends and examine how climate and energy policies may influence these trends.

The European coal industry believes that the three energy sustainability objectives – security of supply, competitiveness and environmental compatibility – must be pursued with equal effort.  Europe’s energy sector faces considerable challenges to ensure security of energy supplies and investment in new energy infrastructure.  Conventional thermal power generation, including nuclear power plants and, to an even greater extent, coal-, lignite- and gas-fired power plants, will continue to be needed for decades to come, so, they need to be sustainable. 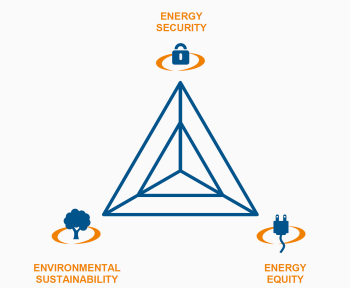 A key requirement for the development of sustainable energy supplies in Europe is competitiveness.  Energy at affordable and equitable prices helps to maintain the competitiveness of European industry as a whole and allows people to enjoy comfortable lives.  At present, the EU imports 55% of all the energy it consumes, at a cost of around €266 billion per year.  The EU imports 87% of its crude oil needs, 74% of its fossil gas and 44% of its coal: all are rising.

Electric power is no longer generated using conventional hydro, coal, fossil gas and nuclear energy alone.  Today, new renewable energy sources, such as wind turbines and solar PV, are growing in importance, but still require reliable backup from conventional sources, at least until large-scale electricity storage options become available.  By valuing the flexibility and reliability of coal- and lignite-fired power generation, there is great scope for developing and implementing renewable energy sources to the maximum possible extent.  The key to Europe’s future power generation lies in a broad mix of energy sources, so that supply risks are minimised, reliability maximised, affordable electricity enjoyed and further progress made in environmental protection. 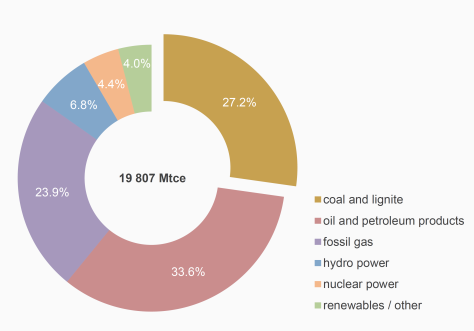 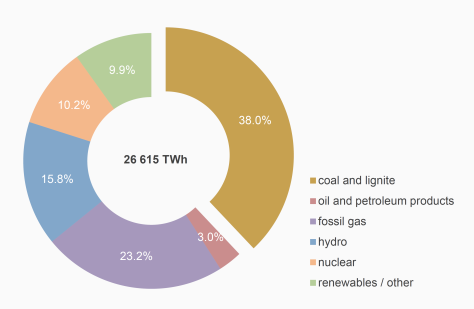 According to ENTSO-E (2019), 592 TWh of net electricity generation in the EU came from solid fuels in 2018 (284 TWh from hard coal, 294 TWh from lignite and the remainder from oil shale and peat).  Hard coal-fired power plants in the EU have a total capacity of 99 GW and lignite-fired power plants add a further 52 GW.  Individual countries have very different energy mixes for power generation, with coal being indispensable for many (Figure 16 and table on page 83). 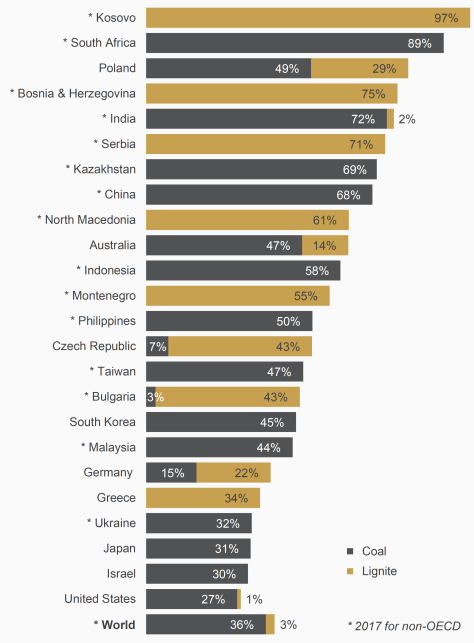 Reserves of coal and lignite are abundant;  total resources are estimated at 17 489 billion tonnes of coal equivalent (Gtce) of which only 1.2% have been extracted since 1950.  Reserves amount to 747 Gtce and are substantially greater than those of either oil or fossil gas, even if one includes non-conventional oil and gas reserves.  In fact, coal reserves account for over half of all non-renewable energy reserves and are distributed more equally than those of fossil gas or oil.  The world coal market is a free commodity market, which – in contrast to oil and fossil gas markets – is not influenced by geopolitics or the formation of cartels. 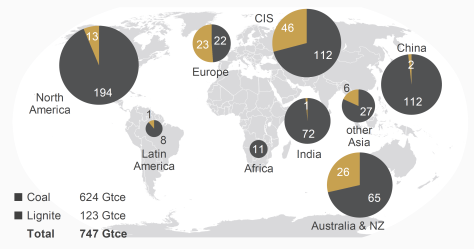 The availability of coal and lignite resources in Europe and around the world, combined with the high productivity of European coal and lignite producers and the diversity of coal exporters to Europe, guarantee a high degree of supply security and competitive prices.  Indigenous energy production, diversified sources of import supply and the storage capacities available at mines, ports and consumers all help to ensure a stable supply chain.  Unlike oil and fossil gas, coal does not require strategic stocks to safeguard against political risks.

The largest coal producers in 2018 were China and India, followed by the United States and Indonesia.  Australia was the fifth largest coal producer and is the world’s largest exporter of steam and coking coal by value.  The European Union was the sixth largest producer, being the world’s largest producer of lignite by a wide margin.  The top‑10 producers accounted for 94% of total world production. 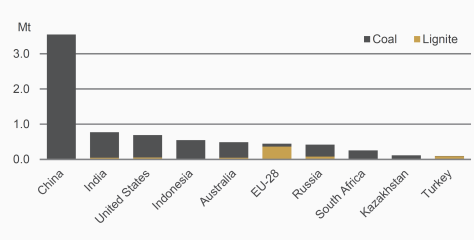 The largest coal consumers in 2018 were China and India, followed by the United States.  The European Union was the fourth largest consumer, with steam coal for electricity generation being the main use of coal, accounting for three quarters of all coal and lignite use on an energy basis.  The top‑10 consumers accounted for over 90% of total world consumption, with the European Union accounting for 7.8%.  At 1.2 tonnes, the annual per-capita coal consumption of European Union citizens is above the global average of 1.0 tonne of coal per person. 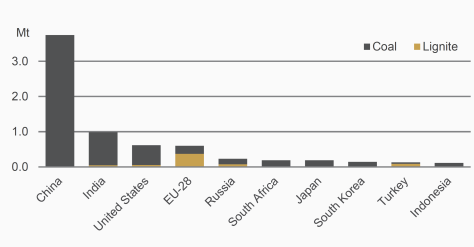 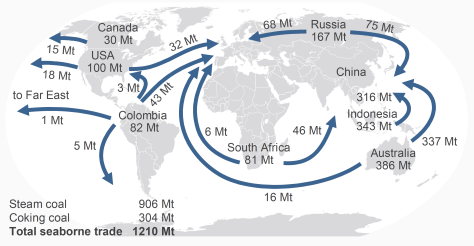 Important exporting countries for steam coal and coking coal are Australia, Indonesia, Russia, the United States, Colombia and South Africa and who together accounted for 91% of all coal exports in 2018 (Table 5). 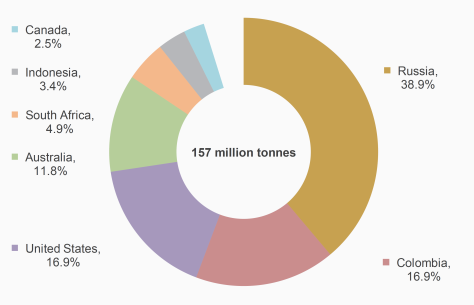 Future world energy scenarios to 2040 and beyond from the International Energy Agency (IEA) and other respected bodies show a marked increase in world total primary energy consumption, with more or less similar proportions of oil, coal and gas in the energy supply mix.

In contrast to the global picture of growing fossil fuel use and hence rising carbon emissions, leaders of the European Union have agreed to reduce greenhouse gas emissions by 80‑95% by 2050 compared with 1990 levels.  Their ambition is to achieve carbon neutrality by 2050, such that residual man-made emissions are balanced by enhanced removals.  The European Commission presented its Energy Roadmap 2050 in December 2011, accompanied by an impact assessment in which it details various scenarios to achieve an 80% reduction in greenhouse gas emissions by 2050.  While all sectors are analysed, the power sector is seen as the one carrying most of the burden of emission reductions.

The IEA World Energy Outlook analyses future energy supply and demand to 2040.  In its Stated Policies Scenario, the Agency assumes the cautious implementation of already announced policy measures.  Figures 22 and 23 show that coal and lignite are expected to remain an important albeit smaller component of EU energy supply for many years. 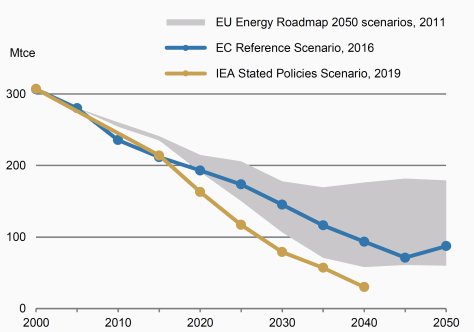 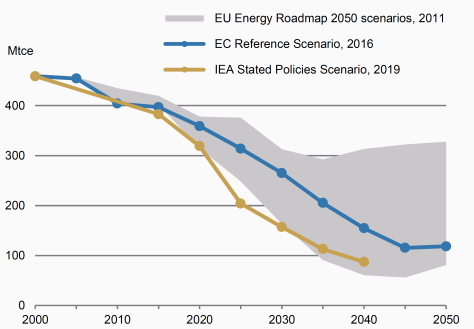